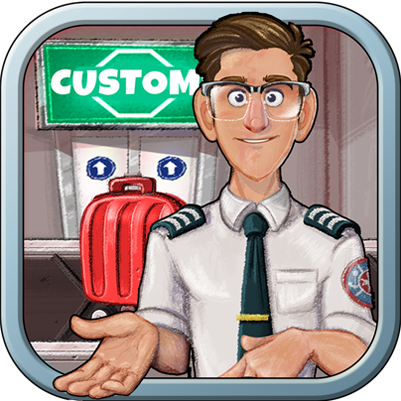 The game takes place in 3 locations, the Airport, Freeport and in the Post Sorting Facility. You play as a new recruit in the Customs team mentored by Reggie, your boss.

Shared international intelligence will help you identify and interrogate suspicious inbound passengers. Your job is to stop and interrogate passengers whose appearance match those mentioned in the daily intel report, exiting the airport from the wrong doors, carrying pets or who act suspicious during interrogation. Take your time with each passenger, there is no room for mistakes!

Work at the Freeport never ends. A continuous stream of trucks flow through the state of art fixed deep X-Ray head. Time is of the essence so make sure to compare the bill of lading document details like container identifiers, supplier names and the list of declared goods with the items you see in the container. You’ll be surprised with what some shippers have in store for you!

An ever-increasing number of packets are shipped to the island every year. Sniffer dogs to the rescue. You have to inspect all suspicious packages – those singled out by the sniffer dogs, coming from outside of the EU or with a particularly low declaration value.

Don’t worry if this feels too overwhelming, Reggie and European wide intelligence will help you along the way.

Do you want to know more about what we're doing?

Sign up here and you'll be the first to know!

You have successfully subscribed to the newsletter

There was an error while trying to send your request. Please try again.